A National Baseball Hall of Fame career began on this date 56 years ago.

The rookie first baseman for the San Francisco Giants got four hits as he led his team to a 7-2 victory over the Philadelphia Phillies on July 30, 1959.

Willie McCovey singled in his first big league at bat off Robin Roberts in Seals Stadium and he was on his way to an induction to Cooperstown in 1986.

In addition to McCovey and Roberts who was elected to the Hall of Fame in 1976, there were four other future members who played in the contest. McCovey had teammates Willie Mays (1979) and Orlando Cepeda (1999), while Roberts was playing with Richie Ashburn (1995) and Sparky Anderson (2000).

After McCovey picked up his initial hit, the 21-year old added another single and a pair of triples off Roberts.

Signed by the New York Giants in 1955, McCovey went on to claim the National League Rookie of the Year award in 1959. A unanimous choice, he finished the season with 13 homers and 38 RBI, while batting .354.

McCovey had 521 homers in 22 seasons, which puts him in 19th place on the all-time list with fellow legends Ted Williams and Frank Thomas.

McCovey was traded to the San Diego Padres before the 1974 season. He remained there until he was sold to the Oakland A’s late in the 1976 season.

Prior to the 1977 season, McCovey went back to the Giants as a free agent. At 39, he responded with 28 home runs and 86 RBI to win the NL Comeback Player of the Year Award. He finished his distinguished career with the Giants in 1980.

The left-handed slugger known as “Stretch” appeared in the post-season twice with the Giants in 1962 and 1971.

In the 1962 World Series, he made the final out of game seven on a line drive to Bobby Richardson of the New York Yankees with the winning on base. The Giants fell to the eventual world champion Pittsburgh Pirates in the playoffs in 1971. 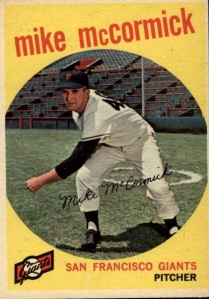 The winning pitcher in McCovey’s first game was Mike McCormick, who won the NL Cy Young Award in 1967. He had a 10-8 record after the contest, but finished the season 12-16 for the Giants as they ended in third place in the NL.

A baseball publication that embraces the awkwardness of life and the 8-1 putout...Stay in Oakland! (cococrispafro@gmail.com)