Gene Bearden’s 1952 Bowman card when he was pitched for the St. Louis Browns.

With the current post-season set up for Major League Baseball, the one-game playoffs have become a regular occurrence.

However, through out most of baseball history it was very rare and didn’t happen for the first time until the 1940s.

The first tie between two teams after the regular season ended was in 1946 when the St. Louis Cardinals and Brooklyn Dodgers finished with identical 96-58 records in the National League.

At that time, the NL required a three-game affair to decide the team that would win the pennant. The Cardinals beat the Dodgers two games to none and went on to defeat the Boston Red Sox in the World Series.

In the American League, the rules were different in that era.

When the Cleveland Indians and Red Sox tied for the AL championship two years later, the two teams met for a winner-take-all contest in Fenway Park on Oct. 4, 1948.

On the final day of the season, the Indians had a lead in the standings by one game over the Red Sox. Cleveland had future National Baseball Hall of Fame pitcher Bob Feller on the mound. It didn’t matter as the Detroit Tigers beat the Indians 7-1. Meanwhile, Boston defeated the New York Yankees 10-5 to create a tie at the top of the standings.

In Boston one day after the scheduled season was complete, the Indians won 8-3 thanks to Gene Bearden, a rookie knuckle-ball ace, and their player/manager Lou Boudreau.

Boudreau selected Bearden to start the game on the mound as he searched for his 20th win of the year. The left-hander had pitched just two days earlier as he beat the Tigers 8-0.

Bearden’s success would continue as he limited the Red Sox to five hits and he went the distance. Boudreau had four hits and blasted a pair of home runs to pace the offense for the Indians.

The 1948 World Series began in Boston two days after the one-game playoff. The Indians fell 1-0 to the Boston Braves in a pitcher’s duel featuring hometown hero Johnny Sain and Feller. The Indians eventually responded to win the title in six games.

Bearden won game three with a five-hitter in a 2-0 decision over the Braves. In the sixth and final contest of the series, Bearden worked in relief of starter Bob Lemon. Bearden entered the game with the bases loaded with one out in the eighth. The Braves scored twice as with the runs charged to Lemon, but Bearden was able to preserve Cleveland’s advantage. He worked a scoreless ninth as the Indians won their second World Series crown. 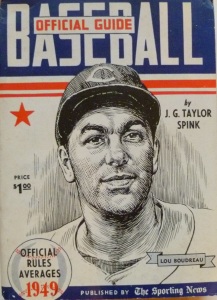 Lou Boudreau was featured on the cover of the 1949 Sporting News Baseball Guide.

Boudreau in the Hall

Boudreau was named the AL Most Valuable Player in 1948 as he led the Indians to the title.

Inducted into the Baseball Hall of Fame in 1970, he won the AL batting title in 1944 and was an eight-time all-star.

He served as the manager of the Indians from 1942 to 1950. He later was at the helm with the Red Sox, Kansas City A’s and Chicago Cubs. He would become a broadcaster with the Cubs from the late 1950s into the 1980s.

Bearden remained with the Indians until 1950 when he was picked up on waivers by the Washington Senators late in the year. He pitched for the Senators and Tigers in 1951, while hurling for the St. Louis Browns in 1952. He ended his big league career with the Chicago White Sox in 1953.

In addition to the extra sessions during the 1946 and 1948 seasons, there were five other playoffs before the inception of the Wild Card that are considered extensions of the regular season.

The most famous of the playoffs is the 1951 battle between the New York Giants and the Brooklyn Dodgers. Bobby Thomson‘s game-winning homer off Dodger right-hander Ralph Branca in the third contest sent the Giants to the World Series. The Giants won the opener of the series and Thomson hit another homer off Branca in that contest. Brooklyn won the second game to set up the historic final moment.

The Dodgers had moved to Los Angeles when they swept the Milwaukee Braves in 1959. In 1962, the San Francisco Giants beat the Dodgers in three games to win the NL pennant.

In 1978, the American League East was decided by Bucky Dent when his homer gave the New York Yankees a 5-4 win in Fenway Park over the Red Sox.

The Houston Astros made their initial post-season appearance after beating the Dodgers 7-1 behind the pitching effort of Joe Niekro to win the NL West.

From 1995 to 2011 as the Wild Card teams were a part of post-season play, there were seven one-game events to determine advancement. The most recent tiebreaker contest was in 2013 when the Tampa Bay Rays and pitcher David Price beat the Texas Rangers 5-2 to qualify for the Wild Card game.

Not a Post-Season Game

Although it was virtually a one and done playoff contest, the game between the Chicago Cubs and New York Giants in 1908 was not a post-season game. It was considered a make-up game since the incident with Fred Merkle in the earlier affair had resulted in a tie. The Cubs won that game and the World Series.

A baseball publication that resigns to the awkwardness of life and the 8-1 putout...Stay in Oakland! (cococrispafro@gmail.com)